One Month From The Ride, and Getting Closer To A Cure

He'll have four, usually, on a given day, but with meals out and lots of high blood sugars yesterday, there were more. One was at 3am. I'm tired. Greg's tired from a 2am check a few nights before.

Do I want your sympathy? Yes. Because three of those shots were given at night, causing me lots of anxiety. It's difficult to talk about--you give your kid insulin to bring down a blood sugar, but then you wonder if he's just high from the excitement of the new television, and if he'll drop down too low while he's sleeping. While you're sleeping. So you set your alarm for 2, 3am, and pray he's safe until then.

Some recent developments in diabetes research show remarkable possibilities. "Boston Children's Hospital Finds Root Cause of Diabetes." On June 13, this astounding headline snuck through the internet mostly unnoticed, except by parents like us. This breakthrough won't see its theories tested on children for years, and yet the hope it brings makes me confident when I ask for the final sum of the $6000 we committed to raise for the Juvenile Diabetes Research Foundation (JDRF); I know the money is going to good use. 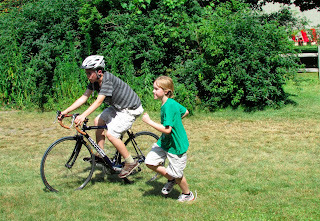 With the bike ride in Wisconsin one month away, we're down to the final $675 or so. Can you help us cross the finish line before we go?

Greg and Simon are doing the riding, by the way. Greg replaced me mainly because we have a bike that fits him. But trust me, I'm putting the miles in on organizing this trip and our donations. Simon has done his part raising money and is now focussing his efforts on the bike.

Theo has raised money, too, and continues to be a good sport about sharing his personal story.

He recently entered an essay contest on the theme "What would your life be like one hundred years ago?" Diabetes treatment was much different then, of course, so he wrote about that based on some research we did.

At one point, he came to me and said, "Mom, I don't know what should happen to me in the end."

"Well," I said, stalling a bit, "I'm afraid you wouldn't have made it back then. You would have died."

He looked down. Then he caught my eye and said, "I know what to do."

He showed me the essay later: a mean doctor declares the diagnosis and a strange treatment, and the mom--me, one hundred years ago--stands up to him and lets him know that she'll fix her boy, thank you very much. She'll figure this thing out.

The essay ends there, with the reader not knowing which way things will go.

But I know how I want this to go. Lacking the level of courage as my fictional counterpart, I want these researchers to figure things out--to have billions at their disposal to do what they need to do.

Help them by helping us.

Visit Simon's page.
Don't worry if he passes his "goal." Simon's donations will be put toward our total fundraising goal.

Visit Greg's page.
Greg doesn't look like he has much, but if they haven't already, they'll be putting the money I raised into his account.

My page is going away. It might still be there, but don't give to it--please click on the above links for Greg and Simon, instead.

Mail a check.
Write a check to JDRF with "Simon and Greg Scheer" in the memo line. Mail it to:


Only checks $100 and over will receive a tax letter, whereas any amount given online receives recognition. 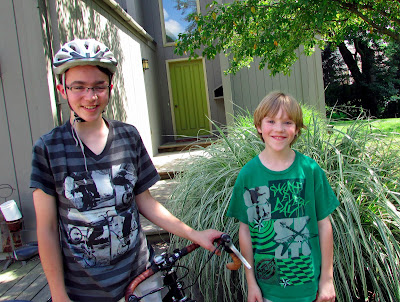