Off the Stage, Off the Page

- March 15, 2015
"Over there," the large man said, pointing to the side of the stage. "And tell the guy in the ponytail to stop showing his butt to the crowd. You should always load from the side."

I had asked where to report for my role as plate loader, a position I volunteered for without having had any relevant experience. This was the Arnold Weightlifting Championships, and these were the Olympic lifts: the clean and jerk, the snatch. Bars were flying overhead, and walking in, the most I knew was the ideal position for my behind. I snuck around to the back of the crowd, quickly switched into the free t-shirt, and muscled my way to the stage.

Ponytail man was the first to greet me. "See the screen up there? We match the color and order of the plates to what the judges put up. Sometimes they change it in the middle of our loading, so you have to keep your eyes trained on the screen." He interrupted himself to make a quick trip onstage; as it hadn't seemed right to inaugurate our relationship with discussion of his rear end, I was glad to see he had self-corrected. Oh, and the plates. Yes, I could see what he was saying, though blue looked a lot like gray and white didn't look like white at all.

"If there's blood, roll the bar over to the front and tell the judges," another guy told me, whispering in the blue light spilling off the stage. They were folding me into their process with no question, though I was the only woman there, aside from the first aid lady. But blood and blue/gray and now... the collar. The competition collars, which hold the plates onto the bar, were unlike any I'd ever seen. There was a wrench thingy and a spinning thingy, and both of these had to be thingyed into the correct--and opposite--directions before the next person would be throwing the bar over his or her head. It needed to be right. And I had about ten seconds to learn.

Let's pause there--the bar loaded correctly, no blood yet, Amy offstage questioning colors and collars and panicking just a little. My trip to Columbus, Ohio last weekend had an objective: try something new. And in the first several minutes, I could call that done. After my morning of volunteering, I would wander around the fitness area of the Columbus Expo Center, though that's probably too calm a verb for what looked more like frantic zigzagging between heavily-muscled creatures. Orange ones, too; many men and--were those women?--had spray tanned what they hoped was as symmetrical a body as the festival's namesake, who, yes, would occasionally Terminator his way through the biggest crowd in the history of the festival.

I stopped at the Strongman competitions, which shifted my perspective like plates banging around in a yoke carry. It's humbling to watch women deadlift double what you can once (250x1), but for reps (500x8). And when you watch the 15th man of the day pull 650 ten times, you're like, Yeah, cool, seen it before. Impress me, would you please?

But watching these extreme feats of strength brought more than the wow factor. I learn some by reading, but the knowledge I know best is that gained by doing and observing. There are things I learned by watching the Strongmen that I can't articulate right now, as I took them in by osmosis and they're still deep in the subconscious; but some day, I know, they'll surface in the form of a coaching cue to a client, or a new attempt on my own.

And back to the stage: let's scoot over to the door, duck under the ropes, and head around to the warm up area. That's where I went after determining that five men could load the plates just fine without me. This wasn't rocket science by any means, but I wasn't comfortable learning on the fly and putting someone at risk.

So I made coffee. Refilled Cliff bars. Traveled across the street on an errand through the Hampton. And most importantly, talked to every athlete and coach I could. Careful not to distract from their preparations, I'd chat with those who liked to linger at my table, and ask questions of coaches standing around. When no one came by, I'd watch the athletes practice their form. Step by step they'd walk themselves through their lifts, and I couldn't have asked for a better seat to this thorough tutorial. (Olympic lifts have a very specific technique, and as I don't have access to the proper equipment on a regular basis, my training to this point has been limited mostly to videos, books, and an occasional trip to a friend's garage.)

It got me thinking about how the best learning happens off the page, and in this case, off the stage. I can point to many instances when, at the start of a relationship with a client, I tried the conventional approach expected of a personal trainer. Wanna lose weight? Let's start sweating. That works great for most people, but one client, I noticed, would find excuses not to return. It was only when I threw out what was expected and went with my gut that I got her to come back, and that move will help her hit that goal better than if I stayed in the role of drill sargent. Intuition, based on book learning, wins every time. Even at the Arnold Championships, I would hear coaches, when asked about specific technique like foot placement, say, "Do what feels right for you." Respect for an individual's biomechanics, personality, and state of digestion that day can take both of you pretty far.

I can live without attending the Arnold again--the parking situation alone is enough to keep me away--but I hope to never stop learning. I won't stop volunteering for jobs I know nothing about, and when intuition tells me to move on, you'll find me at the coffee.

After four hours, the original team of loaders was ready to be relieved. They descended on me at the coffee bar, a band of brothers, and with the same urgency that they had delivered the instructions on blood asked if I could take over. With some hesitancy I agreed, and followed them back to the side of the stage.

I sat next to ponytail man, who picked up on my internal dilemma and was gentle. He explained the steps we'd take to get me trained under pressure. First, I'd go up on stage with him a couple of times and watch. Then I'd load by myself while he stood close and made sure I had it right. When we felt I was ready, I'd go on my own.

He stopped and looked at me. By then I had debated technique with Olympians, trash-talked large men, slipped the better protein bars to women who could throw their bodyweight (and more) in bar form overhead. I could learn to work that darn collar, sure, or I could walk through the doors and see what other challenges were to be found. He saw a woman content to move on.

I grabbed a cup of coffee and headed out. 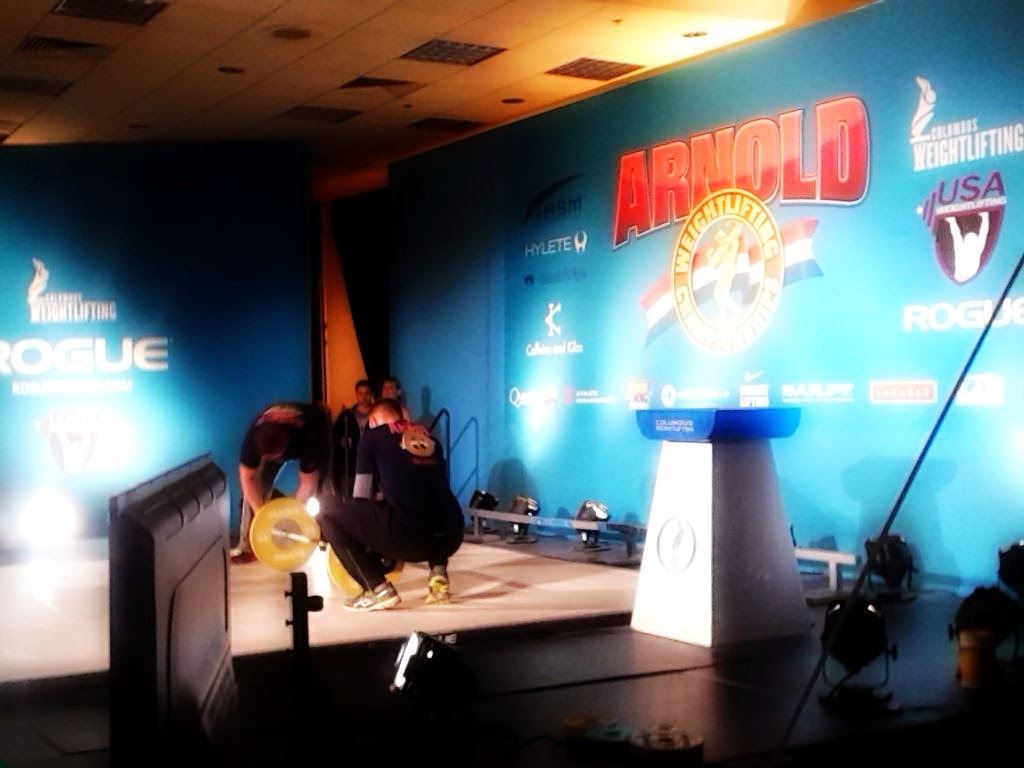 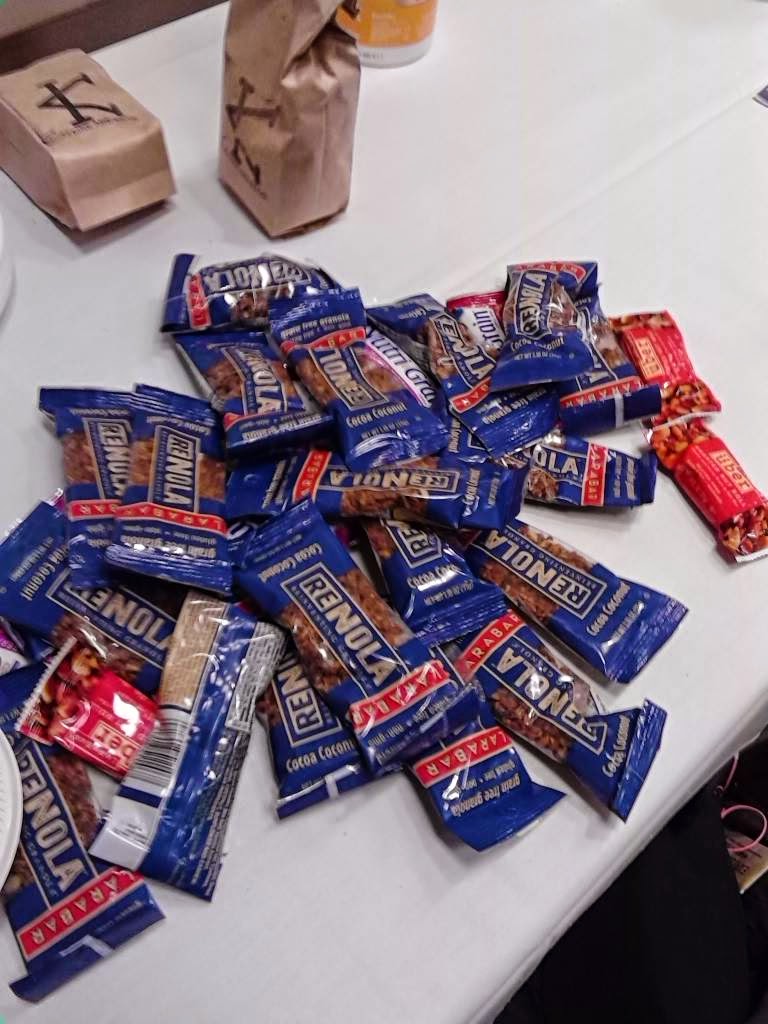 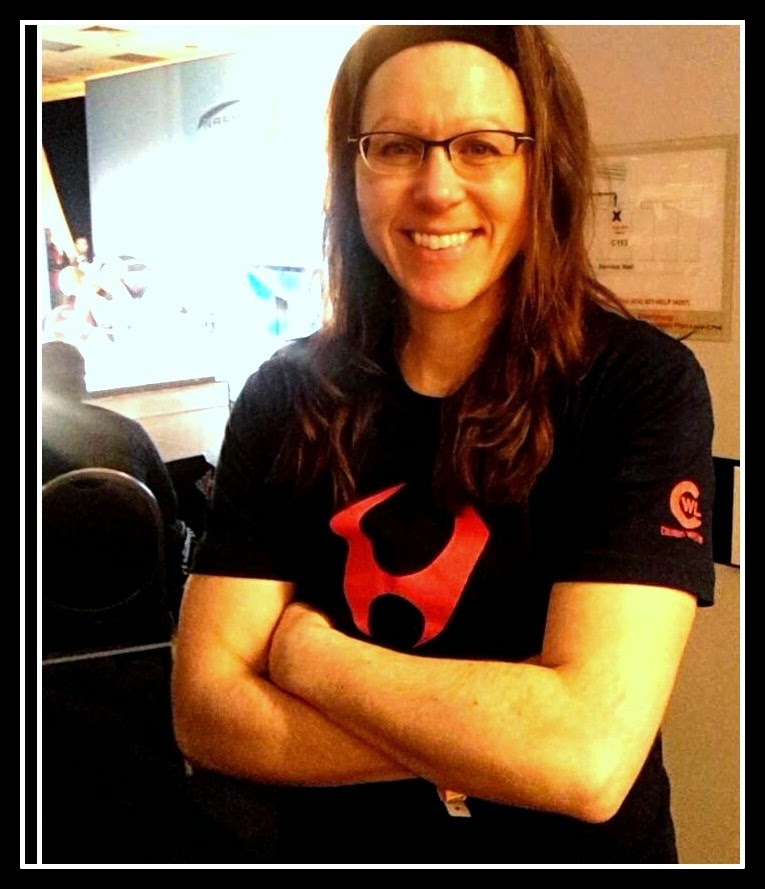 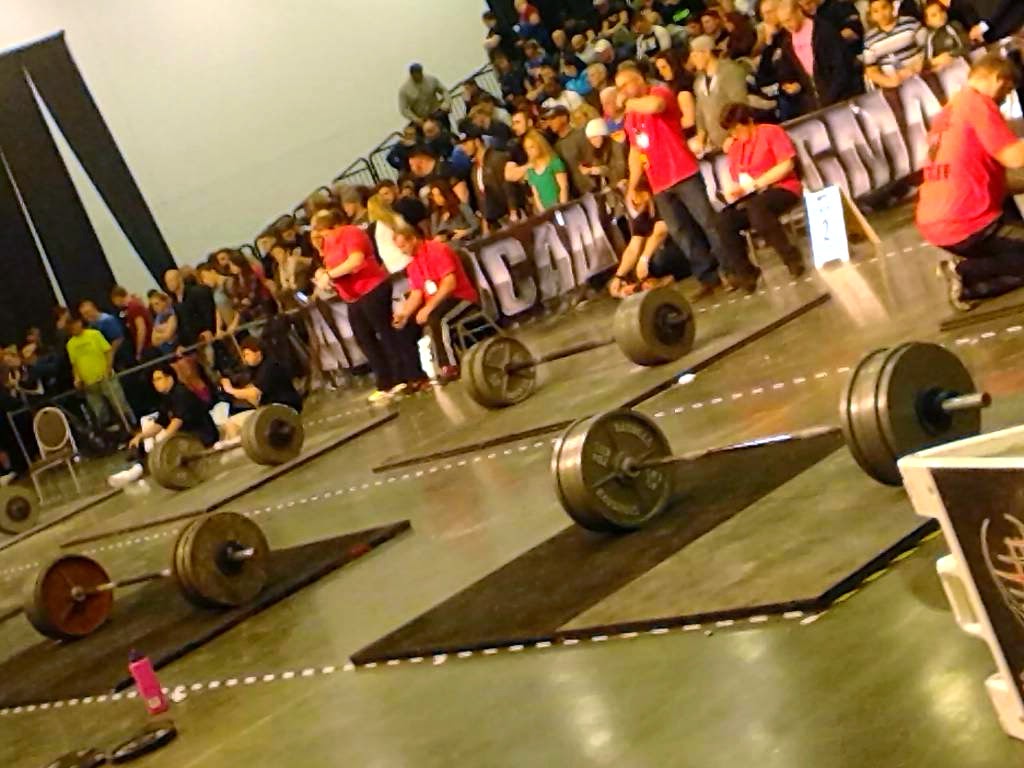