What I Did This Summer 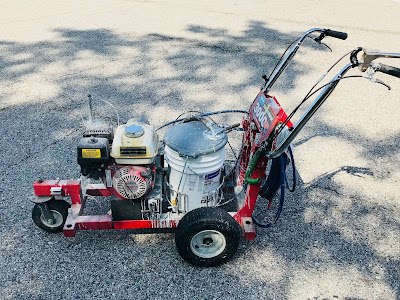 The heart of the BS 3000 is our time tested and contractor proven piston paint pump. Designed for spraying 2500 gallons per year, this pump is used daily by thousands of painting professionals worldwide--with a reputation for trouble free performance that’s unmatched in the industry. It’s compact, easy to use, and quick to clean. Even changing colors is a breeze. Stripe with water-based paints made for athletic fields or traffic lines. A professional quality spray gun is mounted on a multi-position spray arm. Great balance and light weight make it ideal for a one-man operation.

--from the BRITE STRIPER 3000 Instruction manual

The BRITE STRIPER 3000 is my colleague, my therapist, my companion in the stark sun, a test, a coach, a whiny child, an unbidden challenge and unpredictable buddha. I spend long days in vast stretches of parking lots and fields, painting lines in white and safety yellow, and the BS 3000 soothes me. No thoughts are possible beyond this line and then the next, a clearing of the mind with each permanent mark. Stay in the moment. Leave your last mistake behind. At first I would try to cover over an errant line, but this served only to dare it to show through the extra layers of paint. Don't cover your mistakes; leave them be. There is always another opportunity to try again.

I never imagined I could learn so much from a machine.

What Color Is Your Parachute?, a manual for job seekers, predicted that I would work with ideas, not things (aside from "florist," which was offered as an option). It did not foresee the need for side jobs when the ideas wouldn't yet sell at a sustainable level, nor did it know I was not made of matter that could sit at a desk for eight hours. I have to go hard. I can't use the easier gear when I bike, and I can't throw light punches at the boxing gym. For jobs, manual labor was an answer. I spent the early part of the summer sanding floors and repairing bleachers; later, pushing against the weight of the BS 3000 would comfort me at some base level, giving me a support I didn't know I need.

My day begins with three to seven buckets of paint, which first of all need to be opened, a chore that grabs the forearms from a deep sleep and wrestles them to submission. They need to be mixed with a hammer drill, and they must be carried to the lift of my truck, risen, then slid into the bed. They weigh about 57 pounds each, and the handle is thin and cuts into your hand even as the bucket scrapes against your leg. I need buckets of water, too, and their weight at 40 or so pounds is a relief. I carry water in one hand and a gasoline can in the other as a balance.

The BS 3000 itself then needs to be assembled, the spray gun and its accessories retrieved from their overnight soak in a bucket of water. This first assembly will never be exactly right, somehow, either due to my sleepiness (it is well before 7) or because the machine is not quite awake yet, either. The behavior of machines isn't necessarily consistent between the spectrum of working and broken, I would learn. Some days the hot sun thickened the paint and jammed the line; this was a logical progression of events. But some days everything would be fine and then, suddenly, it was not. And so I learned to deal in things (let me take this apart and clean and reinsert a part or borrow a part from the old piece) rather than ideas (if I call someone, they will save me).

The men--they are all men--are patient. They do not ask if I've done this before, and I don't tell them for quite some time that I am a personal trainer at a gym the rest of the week. They do not know that I have a theatre degree, that I have taught courses for graduate credit, nor that I am a freelance writer with a published book. None of that matters, which is as refreshing as water on these starkly hot days. There is just one other person in the department who has worked the BS 3000 for any stretch of time, and he teaches me. Where I would make a stronger point with someone such as myself, he simply states the information. When I ask, "Is the truck hard to drive?" he says, "I personally don't think so." When I tell the story of a mistake, he says, "I've been there."

In two days' time, the men would go directly to their trucks in the morning rather than help me load mine. This sign of trust carried me through the times when light shone on my inexperience. I felt like a fraud, but was I? I had more knowledge and experience of the BS 3000 than most of the men in the department. I had finished many lots by then, plus a couple of football and soccer fields. My confidence, as with the lines, extended only to a point, and then the bright shock of it simply disappeared.

And yet I found my power. My arms, which have always felt heavy with muscle, took on a solidity from my fingertips to my shoulders. My wedding ring barely fit over the engaged tendons of my hand. I could not endure the fatigue of most jobs, the tedium, and yet these days passed quickly as I put down solid line after solid line. Each day I learned something new--the function of a part, how to back up a new truck. For a time I skipped curves, as I had made a spectacular mess on my first try. But during a lot's worth of lines, a meditation, the answer became clear. Lock the wheel into the forward position. Use the wheel lever while painting but don't touch the gas. Squeeze the lever just before the turn, as the line will want to jump.

Above all, turn off your fear and proceed with confidence.

There is no mention in the manual of a switch called fear.

The regular act of testing and pushing my own buttons released that fear--of making curves but also of facing my son's transition to adulthood, the burden of my ex-husband's actions, of how long I could sustain such hard work. These concepts troubled me less now that I had cultivated the art of doing one thing and then the next, relinquishing control over random air bubbles in the line which destroy the illusion of perfection. I did not, in those long hours, think about my sons or my ex or my checkbook at any length; the concentration and the exhaustion renders such thinking impossible to sustain. And the humility of manual labor dropped the intensity of my emotions down a notch; nothing was worth that much fuss. A job this tough built me up, just as its invisibility--people would drive over my lines even as I stood there--turned the internal noise down to a quiet hum.

But the bright sun is causing muscle spasms in my right eye, and my low back isn't happy. Insomnia--from the stress and exhaustion--overwhelms me. I go hard until I am done, and I am done now. And of all the revelations that poured from the BS 3000 in spurts, bubbles and lines, the most surprising to me is that no one wants to hear them.

When I say I spent the summer doing manual labor, they look away, as if embarrassed for me. But I know I've done what many couldn't. I am capable of more than I thought.

I can live with my mistakes, now.

I am able to turn off the fear and walk a straight line, or take a curve when that is needed.