We had recently separated our remaining mice, as Bitey (also known as Bully, Bruiser, and all around Bad Mouse) was relentless in his attack on the other, whose name is either Bobby, Frank or Fred, and, post-injury, called Bleedy.

Bleedy deserved to live out his days in peace, and so we set about arranging the former cockroach cage for Bad Bruiser. Subsequent days were easier on Bleedy, if a little slow. With no one to chase him, Bleedy, whose wounds were healing but whose fur was falling out, spent much of each day sleeping. Meanwhile, Bad Bitey was often found scratching his head, which looked mangier by the minute.

What a way to live--and die, I thought, passing them on my hourly pilgrimage to the laundry room. Not much time left, and some of the spunk is gone. Maybe they could cohabitate once again, peacefully this time?

Yesterday I put them in the same cage. The mice were not consulted in this decision.

Two cages, side by side, with both mice in one of them... chasing and squealing. Almost immediately.

I figured I'd give them a little more time, and then, if Bleedy started bleeding again (or just before), I could return them to the former arrangements easily enough.

Because maybe they actually prefer the calm, quiet, scratch-when-you-need-to life. Maybe fighting all the time is tiring.

And maybe I was projecting a little when I decided to spice things up.

Maybe because I haven't been physically able to box for several weeks now, and have instead been mall walking with the elderly (who are faster).

Simon came home from school that day and first thing, after asking how the mice ended up together (once, when a lid was left open, one was found on top of the other's cage), separated them.

They're back to sleeping and scratching.

I've taken up water exercise (with the elderly).

Maybe this is how it's supposed to be. At least for now. 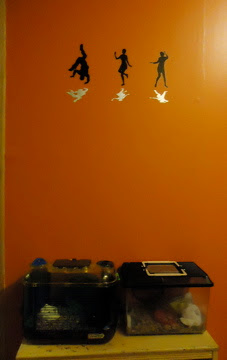 boxing creatures in my house fitness