- April 26, 2012
In a review of Cindy Sherman's MOMA retrospective, Peter Schjeldahl in The New Yorker calls it pedantry to presume that "the mysteries of Sherman's art--photographs that are like one-frame movies, which she directs and acts in--demand special explanation."

"You can winkle out social commentary, if you like," he writes, "...but you will have stopped looking."

Perhaps he will allow me to explain and parallel my travels with Sherman's work, having viewed it via leaving my home in the Midwest, where I act as a wife and mother; and having traveled to Manhattan, where I became boxer, tourist, old friend, new friend, audience, passenger.

If the commentary comes only when one stops looking, so too does the real learning. I find myself thinking more about Sherman now than when I stood before her self-manipulations in the flesh. And I was a better boxer the few times I turned off my mind. When I stopped. When I relaxed. When I stopped trying so hard. 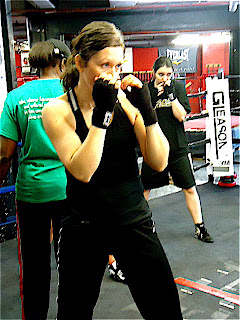 But a boxer. Am I that? I made myself one. Sherman, in her photographs, becomes whatever she wants, both lovely and grotesque.

Schjeldahl: "Sherman hammers ceaselessly at the delusion that personal identity is anything but a jury-rigged, rickety vessel, tossed on waves of hormones and neurotransmitters, and camouflaged with sociable habits and fashions."

I made myself a boxer. Even then, this persona rocked on the waves: sparring with Alicia Ashley, I was tall and quick; with Sonya Lamonakis, of the 201+lb weight class, I was low, hunched, a heavier hitter. The videos reveal two distinct styles. I'm new; I'm playing and responding. But which way is most  fitting?

Travel removes you from your daily ways. Try on new habits, and yet there's nothing to do but follow yourself from your home to your hotel and back.

But present yourself as grotesque, and there is nothing more to fear. Sherman's recent series of society dames is cruel to them, and at the same time hand power to her: the photographer has chosen to portray the ravages of aging with her own body and has put it on record. Typically in our media-saturated world selected sides of oneself are presented for a constructed persona, and yet Sherman's way emerges as stronger.

I pulled sweaty headgear over my face and wore a black mouthpiece. I got punched and bit my tongue. The end of my tongue is purple. I chose this. I have this power over the 200 pound Sonya, who punched me, because I asked for it.

Sherman conveys "inner states of feeling and surmise that are dramatically out of synch with outer, assumed attitudes." Her people don't understand who they are, but we do; neither clothes nor makeup can alter what's being projected.

And of course beneath all that is Sherman herself.

I knew going to Gleason's I wasn't a woman at ease undressing in locker rooms, and that with five, six hours of training each day, the time for a shower would come.

On the last day, after six rounds of sparring, I wanted the water intensely. I stripped down and stayed in the shower long after I was clean. A fellow boxer could come in at any time to use one of the other two shower heads in the large open area, exposing me as I stood there, without any proof of my participation in the sport, naked. But no one did.