Through the Looking Glass

- August 20, 2013
Each time Theo and I stepped into the elevator at the Radisson in LaCrosse, Wisconsin, we were sure to wave at our counterparts in the mirror. "Are you heading to the steamboat cruise, too?" we'd ask. The door would open behind us--and simultaneously them--and we'd each turn to step further into our own dimensions.

A weekend at a type 1 diabetes event feels a lot like that: a parallel universe where people are testing their blood sugars, counting carbs, giving shots. They're worrying about the same stuff we do and they're pulling out the same black pouch with the same silver meter. One offers up a carb count for that piece of pie. Another woman's kid is approved for an artificial pancreas trial, and she cries at the thought of not asking about blood sugars for just that one day.

The JDRF Ride to Cure took our family to Wisconsin for three days, which we extended to five for a family vacation. Greg and Simon fell easily into the rhythm of the event, participating in meetings, meals, and practice rides along with the other 240 riders. Theo and I meandered through the fun little town, musing philosophically on what we'd do on our last day on earth. Theo put this question to me, which he followed up with "if you knew it was your last day."

We waited at the finish line for the guys, singing loudly to the music welcoming back the riders. It was a cover up, I admit, because seeing the bikes return stirred up a surprising turn of emotion in me. Break it down and you know that the Ride to Cure is really about raising funds, with the ride itself icing on the carb-laden cake. But couple a physical act with a ideological one, and each mirrors the other's power, doubling it. I watched an older rider come in smiling, but then she'd close her lips and compose herself. Smile, close lips. I knew how she felt. For on the other side of the finish line, the inflatable arch read "START." We've ridden our miles, but it's not over yet.

Managing type 1 diabetes, we get caught up in the daily details of numbers and shots, but then we are faced with the bigger picture before us: this all comes down to a thing more significant. To food, that basic of human sustenance. Food, which should be enjoyed and relished, that has become a daily chore and challenge.

You can understand, then, how diabetes awareness and events become like religious rituals. Indeed, the meetings resembled the Christian rallies of my youth, complete with testimonies, altar calls, and tears. You're charged with a higher purpose, and you leave convinced that this weekend made a difference. But then you catch sight of a 2009 Ride To Cure t-shirt, and you wonder how can it be that we're not there yet, that Jesus has not yet arrived for his second coming.

And yet this aspect, too, was meaningful; this was Simon's first time participating in such a heady event, and even my passive, back seat son was stirred. For our television debut, the reporter had a hard time getting him to articulate why he'd ride and raise money for his brother, but that's okay: Greg and I know there's nothing he enjoys more than to make his brother laugh, and every time we close their bedroom door at night we hear, "So what do you want to talk about?"

I have seen Simon make sacrifices so as not to isolate his brother at mealtimes. They are unspoken, but the mirror knows. And on the ride, after never having gone more than 30 miles, he went 58. For six and a half hours.

The weekend in Wisconsin was, hopefully, life-changing, as the money raised by 240 riders will make a serious dent in the disease. We're back to the other side, now, and happy to be home, though the memory of those parallel lives will not leave us any time soon. On our last evening there, JDRF played a video that started off miserably: You can't imagine a world without diabetes, the screen read, moving on to articulate all of the thoughts we never quite say, but always feel. And just when we were ready to turn on the lights and call all this to a halt, the sentences reversed, and what sounded despairing was now hopeful, thanks to the effect all these donations will have on research. A brilliant, magical mirroring of reality, reminding us that it is possible to cross over, and step--ride, even--to the other side. 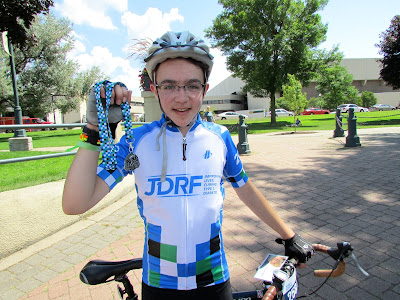 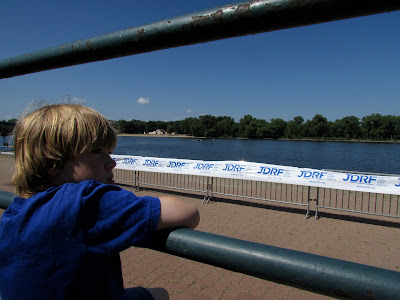 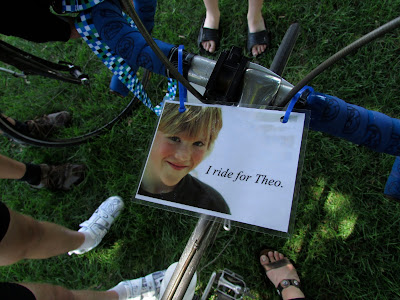