Bough Down: David Foster Wallace died. Say Her Name: his wife drowned. Proof of Heaven: he died but came back to life. The Obituary Writer, you see what I'm getting at: it just happened this way. I was not looking to read frequently about death. Neil Gaiman's The Ocean At The End of the Lane was pretty dark, as well. And We Need To Talk About Kevin, my god; excellent writing, awful subject.


TO COUNTER THIS, I PRESENT TO YOU MISTER ROGERS

If you're feeling bad about yourself, two people: Mother Teresa and Mister Rogers. Mother Teresa soldiered through so much suffering you'll slap yourself for all your disgusting self-pity. Mister Rogers will stand you upright again, hold you against that red sweater and tell you how special you are. I'm Proud Of You by Tim Madigan is not the best book about Mister Rogers, but the stories relayed inside will buoy you. I can't get them out of my mind.

Elizabeth Berg: as with most summers, I turned to her in June while feeling dull and out of good reading material. Only one Alexander McCall Smith this year to ease my troubles: Trains and Lovers.

With the internet, we may now connect with authors. We want to do this; this is not always a good thing. Here in Grand Rapids we have the biyearly Festival of Faith & Writing, which one year I attended in order to hear from certain writers. But my favorite memoirist, friends, was a bore. The man who fashioned the perfect sentence: a pompous ass.

These writers were still a step removed, whereas I actually made or attempted contact with the following writers of books read this year.

The World's Strongest Librarian, by Josh Hanagarne. Josh Hanagarne, who is now my friend. Well, friend as in facebook, along with 1,960 other people. But I can call friend the librarian who wrote an endearing memoir on managing Tourette's through powerlifting. I loved the book for its perfect pitch writing, conversational yet never simplistic or empty. His insider look at kettlebell workshops is priceless, and his underground gym guru, Adam T Glass, puts hope and humor into my profession. Maybe someday I'll be friends with Glass, too.

Drama High, by Michael Sokolove. I really liked this book about a drama program in a small Pennsylvania town, so, feeling benevolent, I wrote to Sokolove on his website to say so. And then nothing happened. This man is not my friend.

Intervention: Course Corrections for The Athlete and Trainer, by Dan John. Despite Dan John's down-to-earth style of writing, I'm starstruck by the man: he's brilliant. A former discus thrower and longtime strength coach, Dan has insights that other big names in the field are just now putting names on, stuff the guy's been doing for years. Sometimes, even he can't explain why something works, but it does, like his 40-day strength program, which I tried for 21 days: brilliant. I'm still parsing out the benefits I gained from this stint in September. And of course, I wrote to him to tell him so. And HE WROTE BACK. Sigh. I wrote again later to accuse him of making me fat, and HE WROTE ANOTHER TWO SENTENCES. These were not in depth communications by any means, but I heard from Dan John. I think I can call him friend.

Carry On, Warrior, by Glennon Doyle Melton. Melton's writing masquerades as light mommy blogging, but she's quite skilled and insightful. At times molehills become mountains, but I forgave her and read to the end. Her blog, however, didn't keep me there.

Someone, by Alice McDermott. I'd missed her writing, and this book has some luscious sensory descriptions. But I was put off when more than a few pages had the same adjective twice. You just don't do that. I read on thinking there was a grand scheme I'd missed, but in the end, these seem to be mistakes. Someone of McDermott's caliber deserves an editor with a sharper eye.

My Mistake, by Daniel Menaker. Speaking of mistakes... it was fun to read the insider scoop by New Yorker editor Menaker.

When The Emperor Was Divine, Julie Otsuka. Strange, compelling read. I should state here that there are books I don't like and don't finish, and some I don't like but do finish. To these I give credit for holding my attention. I started a couple others, like The Lost Carving and Water for Elephants, only to eventually say, Nah.

My favorite fiction this year: Tomorrow There Will Be Apricots, by Jessica Soffer, The Thorn And The Blossom by Theodora Goss, and, above all, The Post-Birthday World, by Lionel Shriver. Shriver's prose is so deceptively simple; you're in without your consent, and she holds you as she pleases. Whereas some of these titles I had to look up again to recall the plot, with The Post-Birthday World, I can still smell the snooker table.

For favorite nonfiction, see Books By Humans: Hanagarne wins the prize for best overall, while John wins for teaching me the most useful stuff in an enjoyable way.


AND THE PRIZE FOR WORST BOOK EVER GOES TO

Children's books do not usually make my list, but this book is a grand exception. I've read hundreds, maybe thousands of books to my children, but no book has ever been quite as bad as Tinky's Magic Cookies. Say it with me: Tinky's...Magic...Cookies. I believe the book made it into our library pile because one of the kids connected Tinky with Cookies, and thought for sure some bathroom humor was at hand. Instead, some moral-ish tale of a dog carrying cookies on a walk...I just...let's stop. The story, and the accompanying illustrations, are beyond a believable description. You see that at the start of this blog post, I reign in my urge to tell you the names of the authors who disappointed me, but this author gets no mercy. And no cookies. 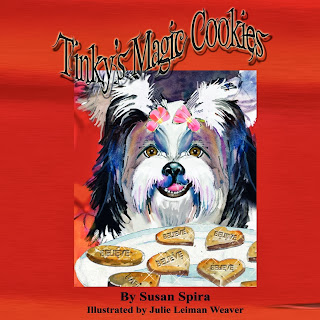