- January 11, 2014
Every once in a while, I finish a personal training session and think, Yes. I've learned a lot. And when I try to pin that wisdom down, I sound just like a self-help book.

But it's all true. Those simple tips you read in magazine sidebars or thin pop psychology books? Try them. They work. I didn't set out to become a guru, but by naturally responding to the job I'm in, these traits are coming along. I used to think I had some of this down, but now I see how young I was; now, at 43, I'm settling in with some of the qualities I needed back in my other jobs, and maybe had a smidgeon of, but now I'm in deep. Sometimes just treading in that water, but often floating with calm.

I love it. Let me try to tell you what others have been saying for years.


Set boundaries. I fired my very first client. Before I could even begin this trade, I had a client--actually, the mother of--who tested every boundary I didn't yet have. In the interest of professionalism, I won't rat her out with the details here. But at nearly every session, I was forced to articulate all aspects of my role as trainer, from how often you can call me to No, I will not train your daughter when she's injured. After three sessions, I told them they'd need to find someone else. I also wrote an encouraging note to the daughter, which I'm sure wasn't passed along. That's the sad part of this story. The good news is that right out of the gate, I learned exactly who I was.

Be confident in your abilities. Even before the client who sent me to psychotherapy, I decided early on that I would be me. I would not try to line up with personal trainer stereotypes, especially as seen on TV. I would not pretend to be ultrapositive. I would not work people into sweat just so that they'd say, Wow, that Amy really kicked my a**. I would do what was best for someone, and I would do it my way. To that end, the scope of my practice is so varied you'd hardly guess I was the same person. The newbie I start from scratch, even though she wants to lose weight, because she isn't ready to have her butt kicked just yet. The experienced weekend warrior gets the full powerlifting workover from me. The 70-year-old man gets no mercy, because I see his potential.

I tell them to please eat heartily this Thanksgiving. I don't applaud the overcounting of calories; I want people to learn balance in life, and not think of me as a new year's resolution.


Give what's best, which isn't always THE best. Let me clarify. I have spent most of my working life in the arts, where creativity is rewarded. Your way must be the most clever, unexpected, and full of imagination. This approach has served me well.

But then I start working with bodies. Every body is different, yes, but nearly every body has the exact same parts. Through my certification in Functional Movement Systems, I have learned about these parts in a new way, yes, but also patterns; every body should aspire toward functionality in a series of basic patterns such as a the squat and hip hinge.

The creativity comes when I determine which ways to work those patterns for an individual, and when I plan out a flow to the hour and to the cumulation of sessions. But in the end, this individual's got the same parts as that one, so I can rest knowing that I don't need to be overly clever. A pushup is a pushup is a pushup. Hindu/divebomber/incline/decline/atomic/wall, it's okay to do what's done before.

Listen. It's okay to do what's done before as long as you listen. Listening (and writing down) provides the information you need to make decisions, but also is exactly what some people are paying for. Before I started, I didn't understand how I was supposed to chat AND teach exercise AND possibly get them a little sweat on. In an hour. Now I see the integration; as clients come more regularly, the relationship develops, and you talk more or less but either way, you given them what you know they need and also what they want. If they want to take time out of the hour to talk about their week, then that's what you do. You get done what needs to get done, but you also stop and listen.

Perhaps this is the most obvious of my points, but it's one I had to learn. It ties into the message above; my tendency is to feel that if I haven't packed your hour with the most creative and interesting exercises of your life, you may be unhappy with spending your money on me. But this has never happened, and thankfully, I keep learning over and over again to listen.


Be confident in your vocation. When I'd tell people I did theatre with homeless people, they'd ooh and ah. When I say I'm a writer, their eyes light up. When I say I'm a personal trainer, one of two things happen--a person will point to or grab a body part (men: knee or low back; women: back of upper arm) and ask my advice, or, if I'm in the company of intellectuals, the eyes will glaze over.

I am in a trade profession now. It is not considered a life of the mind, though I could argue against that point vehemently. It's a trade that shows no sign of slowing in business, and yet to the community I come from, it's a little lesser than.

Nowadays, when people ask what I do, I don't automatically start the list of writer, etc; I say personal trainer and see what they do. If they put me in a box, I accept that as more of a reflection of them than me. 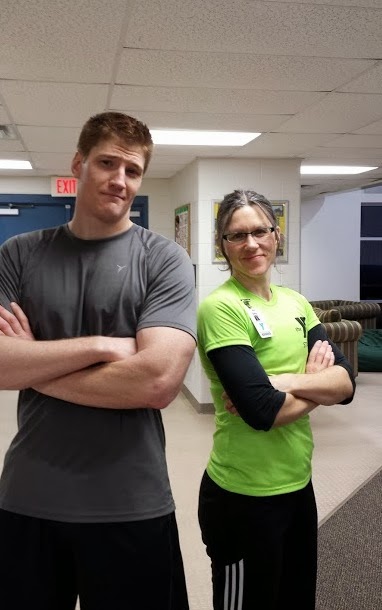 As soon as I got into my early 30s, I had recurring lower back injuries, but those are pretty much gone.

I was not expecting to see gains as fast as I did.  I noticed a rapid increase in strength. I received a lot of benefits, but if the money had only improved my back like it did, it was worth it. I can throw my kid around now, I can carry large objects--none of these things bother me anymore.”
personal personal training