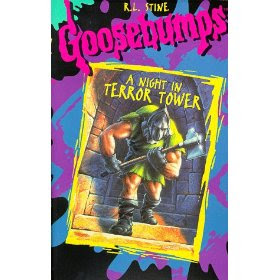 The other day at the library, my son pointed out the cover of this book and said, "That looks like you, Mom, except for the hat and ax."

Surely he was referring to the large muscular frame and my tendency to wear green, not the humpback nor intent to kill.

I chose to take it as a compliment. It's all in how you see things, right?

I was thinking about perspective today in the weight room. Lately I've been plotting my retirement from competitive weightlifting, if you could call it that when you've only been in one competition and no one else was in your weight class. I have all sorts of excuses. My shoulder! My knee! Allergy shots make me weak! I don't want to eat enough calories to lift heavier weights, because I don't want to buy another new wardrobe!

Mostly I was just sore--literally and figuratively--because I'd been working hard for months and seeing slow results. I don't have the capacity to go higher, I told myself. Give it up now.

But then I switched over to what we call the Ohio State program. It's one of those pyramid structures in which the weight increases as the reps decrease, until you reach a peak in the middle at 95% of your one-rep max (If I had a nickel for every time I went here...); then the weight decreases and the reps increase, and you rep out at the end.

I benched 2 reps of 110 at the middle, and 12+ at 85 at the end, which means that next week, I can move up to the 120 level. I'll probably sit at the 120 level for awhile, and get all sore again because I'm not improving, but that's where perspective comes in: on this day last year, according to my workout journal, I was at the 105 level, and I only hit 100 one time. Heck--a couple weeks before that, I could barely squeak out 95 once. When you're at my stage of the game, ten, fifteen pounds is a big deal, even over a year's time.

Progress is slow, but it comes. Hold your axes! Good things come to those who wait.
weightlifting