Stevens' response--"oh my God"--is the only thing left to say. But after all that--"he took off all their clothes for them"--he sings this:

Your temptation, vice, sin, whatever you call it: it strangles you. Is it illegal? Does it hurt others? Imagine that you were caught. Think if you made a fatal error in judgment and landed in prison.

Yesterday, five former prisoners performed a play. Their vulnerability was on display, a sign to all of us to stop before we judge. What was their crime? Was it as bad as Gacy's atrocities? Or your secret? 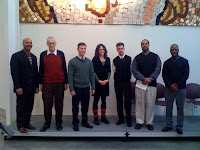