Like today, in the library, when I'm browsing the stacks and come across some parenting book with a title like "The Fragility of Childhood." I wondered, and not for the first time, I'm really messing them up, aren't I?

My boys have spent Saturdays watching me stand in line with large tattooed men in order to grunt under a heavy bar. They've attended my plays with real men announcing their real crimes. They listened as I pointed out one of them as a relation to George Foreman, "you know, the guy who fought Ali in Zaire," and knew exactly who I'm talking about.

When I first became a mom ten years ago, I read all the books. But it just so happened that my first son didn't go by the book at all--he talked late, he created his own sign language, he refused roleplay and sorted all his belongings by color and place of origin. At some point, I had to ditch the advice and go with my gut. I regret to say it took me several years--and another child, with another style--to learn this lesson.

But since then, I hit a point every once in awhile when I think that maybe being unique isn't so hot after all. Maybe the tried and true methods are tried and true for a reason. You know how that happens. Usually the parental guilt hits when I'm enjoying myself otherwise. Wait, the brain says, You're having too much fun. Surely there's something you've done wrong?

But I left the library not with a book on childhood, but, instead, on large scale sculptures from the 1960s and 70s. A big, nicely bound art book, chosen for my seven-year-old son. He pored over it after school, then hit the pile of scrap paper. When I asked if he was copying a sculpture he had seen or creating from scratch, he replied, "I'm using a picture I saw and doing a remix."

Meanwhile, I made meatloaf with a side of corn; this homemade, quintessential meal would end with my directive that someone please feed the giant hissing cockroaches in the other room.

Taking what's gotten from books and making it one's own. It's okay to do. 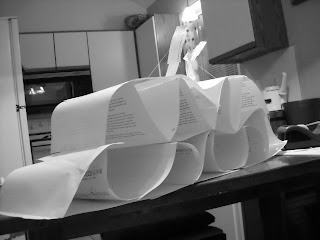