- November 19, 2016
I have to wonder what he ordered at Applebee’s the morning of my grandmother’s funeral. Was it the Fiesta Lime Chicken, whose name invokes a celebratory tone appropriate for the $364.25 purchase of new shoes? Or the Three-Cheese Chicken Cavatappi, with Crunchy Onion Rings to start: heavy, dense comfort food to soothe and bury any guilt that may come with the use of someone else’s credit card, right before she awakened in another time zone and dressed in black.

Wondering. Standing witness at events I can't control. Sadness, grief, humor; you can see my year reflected in that story of fraud, which, by the way, happened twice in 2016--on a card that was difficult to get, thanks to my new financial status.

The year began with all the things breaking.

Smoke filled the January morning I was to start a new job. My older son, having offered to start my tea, chose to place the electric teapot on the stove. I descended the staircase to a cloudy room. Have you seen my open floor plan with the high ceilings? I couldn't, for the smoke. That same stove would decide to flash sparks through the air, just a day after the light fixture fell from the ceiling below. And the sinks refused to drain, and the pipes wanted to drip, and the toilet demanded to be replaced. I chose the "comfort-height" model, upon learning that comfort was something you could buy.

The new job would end in the emergency room. Maybe it was an Aston Martin the man decided to run beneath our employee break room, and maybe he was polishing its sleek curves when he forgot to flip the ventilation switch to ON. The new job would end with me standing mid-store, attempting to cross the room but unable to figure out how to use my legs. Carbon monoxide poisoning, if it doesn't kill you, is a funny thing: I was somewhere deep inside that standing person, knowing that by all appearances I looked ridiculous but was unable to explain myself. Or move. Once I could maneuver my legs and make it to my destination, I cried and held my head in my hands. So carbon monoxide poisoning, I now see, is a lot like divorce, which also happened this year.

Do not have a knife in your purse when visiting the courthouse to file divorce papers. Security looks at you, a seemingly sane middle-aged woman, quizzically, and you give them that look in return, because you've forgotten about the knife. And then they pull you out of line and say, "You can have this back when you leave." 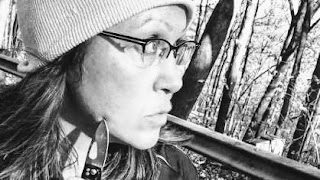 The divorce became legal in the same ten-day period as my root canal. Never had I required as much dental work as I did during that time, including a week or so before. I had scheduled all of these appointments to occur before the court date, to make full use of my soon-to-end insurance benefits, but then was accidentally taken off of the policy by someone who thought the divorce was final, only to face some very large bills.

And then there were the two months when I had no health insurance. I didn't talk about this.

And the month when I thought I would exercise at home, having left my gym, community and job, all one package, right when the man of the house moved out, just before the turn of the year. But then came the purchase of a day pass to The Salvation Army Kroc Center. Next a day pass punch card. And then a membership, which was soon unnecessary because the day I saw, though the glass walls of a studio, a group of senior citizens running relays and smiling, I had to compliment the teacher, who turned out to be the fitness manager looking for personal trainers. He offered me a job.

But before that, I went to prison. Not for the knife, but because of a book I wrote--you can read here about my visit to the Life Change Book Club, right when my own was getting an overhaul. An inmate sent me a poem a week later, through an outside contact, and you can see that here.

(Other events, both lower and higher on the dramatic scale, were notable this year, but personal, too. This post can be considered a list of the more outrageous moments, which sometimes felt as if they grew in absurdity as their count increased.)

Throughout the tumult, The Kroc Center has been just that for me: a place where I feel centered. The senior citizens continue to impress me. Their high level of fitness is proof of what can be achieved when you refuse to accept what you've been told is your ceiling. When the person next to you is not someone who has given up, but who keeps trying new avenues; you then know that's possible for you. These same lessons have gotten me through 2016. I have been surrounded by people who tell me to keep going, who pass the baton and cheer me on. Who push me to use the parts of myself that have been buried for too long. Have they always been there, and had I needed this kind of year to learn to accept such a strong undercurrent of support? There is a freedom of movement now, a newness, a new name; but even this is continually under threat of smothering, like a thick cream sauce being spooned over more and more of the cavatappi. And yet I am not broken.