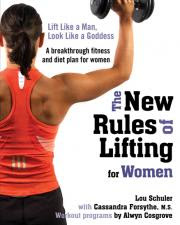 Lou Schuler is an award-winning journalist and author of books I like, such as The New Rules of Lifting for Women. He calls the stories on my blog "small, well-crafted gems," so I'm trying to keep him around. Lou agreed to be interviewed here on WAIT FOR IT.

Lou, I recently went shopping for wristwraps, and among the choices were "Convict Pro" and "The Strangulator." What's with all the violent imagery in strength training? Did it start with the insulting of Mac and devolve from there?

Amy, I remember, going back five or six years, we were on vacation, and I had taken my kids out to a playground at a park. These other kids at the playground, a little older than my kids, started up a Star Wars game. And these older kids all wanted to be Sith, like Darth Vader and Darth Maul, because the Sith had the coolest superpowers. They didn't see them as the bad guys.

How does that relate to training? Maybe the original selling point of strength training was that skinny, weak guys like me would be able to stand up for themselves. For me it was more about sports, but it was still a means of being able to hold my own in an unfair world. I loved sports, I wanted to be good at sports, but my genetic mash-up had left me with a body that refused to move fast or hit a baseball where no one could catch it.

But that was back in 1970, when I was 13. Nowadays, it's a given that everyone needs to train, for everything. A few years back I filed away a newspaper story about a chess champion who lifted weights to improve his focus. The development of strength and power has become value-neutral. You just want to make sure you're the biggest, baddest mofo in the room, in the ring, or on the field.

I don't follow MMA, but I think its popularity is part of this trajectory. It's not about good vs evil, or Macs triumphing over sand-kicking bullies. It's just tough, well-trained athletes competing in brutal but fair competition. Everyone who climbs into the ring has made the choice to be there.

It's understandable, then, that women who meet up with grunting, sw

eaty Sith-wannabes wielding free weights will soon back away and step onto a treadmill. You're trying to convince them to do otherwise.

Amy, that's a good point, and I've never thought about it that way. Thanks a lot. I guess I'm going to start drinking early today.

It'll be okay, Lou. Why don't we talk about your mom, instead? You said she "had biceps before biceps were cool on women"--long before the image of Jillian Michaels began appearing on everything but car parts.

My mom could've kicked her ass. Mom used to get out in the yard and play baseball with us, and I don't think there was any job around the house she was afraid to do. She was one of those women who never gained weight, even when she was pregnant. I'll never know how much her weight control came down to physical activity and genetics, and how much was willpower and self-denial. I don't remember her ever saying she was on a diet, but I also have few memories of her actually eating.

I should mention that she also smoked for most of her life, but when she decided it was time to quit, she did. She'd been cutting back for years, and then one year when I went home for Christmas I realized she wasn't going outside to grab a smoke. She acted like it was no big deal. She could quit smoking as easily as she could skip a meal.

I think all that came back to haunt her in her senior years. She just turned 83, and has a lot of physical problems that I suspect are related to poor nutrition and a body weight that was chronically lower than it should've been. If she'd been a lifter, with her genetics, I think she'd be a lot more 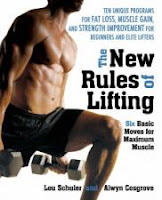 mobile than she is now.

Then again, I can't really criticize someone who's outlived most of her siblings, and has fewer chronic health problems than the two who're still alive. And she's outlived my dad by 14 years and counting. Of the two lifestyle patterns, his "eat everything" vs her "eat nothing," it looks like she picked the better option. It'd be great if they'd both stayed somewhere in the middle, but that wasn't in the cards for either of them.

So...women should lift weights and watch what they eat. Someone should write a book about that.

I'll tell you a funny story. The other day I'm at the driving range, trying to get some swings in before my annual golf outing with a group of former colleagues. Out of the blue, a guy at the range, who I'd guess was a little older than me, starts telling me about how the core is the key to good golf. You can't just swing with your arms, he told me. You have to engage those core muscles. That's where the power is.

The funny part is, just a few weeks ago Alwyn and I finished working on a book that focuses almost entirely on core training--The New Rules of Lifting for Abs, which is our third book in the NROL series. And going back a few years, I edited Core Performance, by Mark Verstegen and Pete Williams, which I think did more than any other mainstream fitness book to popularize the idea that the core muscles are the key to athletic performance.

As the lady said, someone should write a book about that.