"I was always the smart girl, not the pretty one..."

Oh, forget it. How's a size 6 going to win a weight loss contest?

The word "transformation" in the contest's title is what had caught me. The day before, I had used the word frequently while working on an essay about therapeutic techniques in the arts. "Theatre as a means of personal and societal transformation," I had written.

And then some chick in a bikini advertises the same product and promises me a free plane ticket, to boot.

The contest is now officially off my radar. (In case you haven't yet picked up on this: I have a fetish for reaching for brass rings on other people's carousels.) But it got me thinking: now might be the right time for a new goal or two in both areas of transformation.

I quit my job this past week. A few weeks prior to that, I decided to no longer work toward getting better at the bench press. Both were the right decisions. No longer did I want to be a sore, walking set of triceps; and though I cared deeply for the women at the shelter and did well by them, I needed to be safe. The effect was like leaving a lover you knew you couldn't stay with for the long haul.

Today, I'm at peace. I've got some grieving to do over leaving the shelter. As for the bench press, I knew I was okay when I heard about an upcoming competition, took a minute to calculate its feasibility, and said, Nah. No regrets.

But this won't last long. Something interesting has to be on the radar, or I can't rest. So how about a transformation or two over the next, say, 8 weeks?

Goal 1: Figure stuff out. Grieving, as I said, is on the list. Thinking. Reading. Writing. Working on the mind, soul, and...

Goal 2: Bikini body. Go on, admit it: Had I made this number 1, you'd think less of me. But I don't want to be a brain on a stick. My body should improve just as my spirit should soar. Mental and physical health are partners. I remember telling a woman that the reason I was in a theatre class with her at that moment was because I had previously joined the Y. (Literally, I had read about Theatre of the Oppressed while waiting for Theo to be done with a tumbling class. But the reason I brought the book was an increasing awareness I had, through exercise, of the mind-body connection.)

And doggone it, I turn 40 this year. It's about time this smart girl shows the beach what's what.

This is no extreme makeover, folks. I'm only doing what I'd be doing anyway--the bikini's already been bought--and what everyone should do: grow and improve and evolve on a regular basis. I'm just being purposeful about it, and recording the process as I go.

Success will be difficult to measure. Fitness people like to go by the scale and the ruler, and I could, too, though I want to increase my size through muscle, not lose it.

And how to measure the movement of the mind and spirit? I'm hoping this will become clear. Had I not made this an official challenge, I would have meandered in this area, but now I've got to make regular reports.

This is going to be good. Who wants to join me? 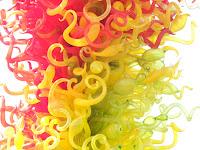 for inspiration: one of my favorite groups. also check out the ramped up version of the same song.
transformation challenge