I'm In The Mood For (A Few Weeks Of) Love 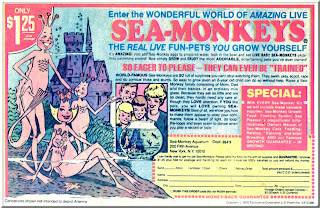 Don't tell the internet filters, but something had to be done. Googling "sea monkey sex" was the least I could do; six hours had passed since I took note that two were still attached. SIX. Then seven. Eight. Finally I read the small print and learned they may keep this up for a few weeks. On my kitchen windowsill, whirling about while I slice strawberries and scrape the pots and pans. WEEKS. While swimming.

Those not attached at the present are already with child, and each of these ladies may produce 20 offspring. I tell you, the babies aren't babies for long; it was all cute when the specks finally became visible, but the rate at which they grow is alarming. Twenty each would equal 60 more, and once the amorous couple takes a breather, it's safe to say we'll have 80. That'll be in two weeks, right about when my husband returns from a long trip. At least someone's getting some action around here.

And what are these things, anyway? Crustaceans, yes, but they were sitting on a shelf in a rundown Toys R Us when I bought them for my son's eighth birthday. And now they're mating. Right when you think you've got it all figured out, powder from an envelope is mating at your kitchen window. I understand nothing.


What's with all the posts on mating? Time to go back and read my post on the mating style of the sloth. And another experience raising small creatures: The Ant Farm: She's Come Undone.
a category can't contain this creatures in my house