My Day On The River And At The Cage Fight

In the morning: a two-hour kayak trip, alone, on the Rogue River in Rockford, Michigan. A pair of chain-smoking women in their fifties strapped the kayak behind an old mini school bus, whose NO TOBACCO USE OF ANY KIND sticker had the NO ripped off, and said, "Sign this paper that says we gave you all the proper safety equipment." They helped me into the river and pushed me off. "Don't get hurt."

It was lovely. Turtles and ducks were in abundance, and I met up with turkeys, two swans, a white egret and one curious deer. About an hour and a half in I realized the ladies had told me to always keep right and that I had an hour left after the fourth bridge, but not where they'd pick me up. I blew the nature moment by retrieving the cell and calling my husband to check the website for my final destination. Sure enough, I was almost there. 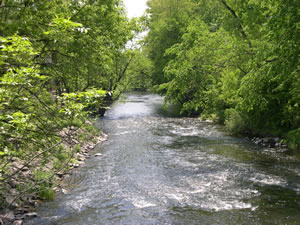 That night, I headed out to meet up with very different wildlife. 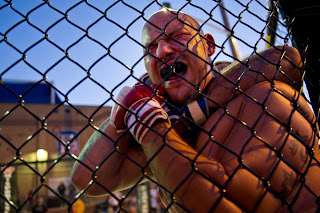 My first time at a pro boxing event. With cage fighting, too.

The fighting sports are violent. I knew that. A matchup of evenly-skilled players, however, makes for good, tough sport that's exciting to watch. That's what I paid my money to see. Instead, I got this guy in his swimming trunks. 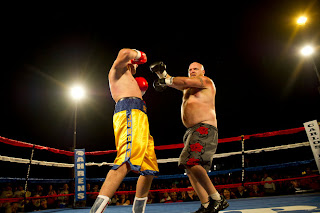 He's up against a two-time winner of the Golden Gloves Nationals, who was an Olympic trial hopeful. The belly you can see; let me also point out the man had zero muscle tone in his arms. After he was finished, I heard one of his friends say, gleefully, "At least you got $500!"

You don't believe it 'til you see it, this paying people off the streets to get a win for new pro fighters.

When the fighters entered the ring, the people standing behind me and my friend would decide who was the boxer and who came off the street. My litmus test was this: if your shoulder blades wing out, you don't box.

Boxers need to be in tip top shape, disciplined in their training, lifestyle and nutrition. One particular young man stood out for his lack of health; he looked strung out, just out of the bar, which he might have been. And yet there was a disturbing smile he held on to even while being hit, his black mouthguard accenting the blood in his teeth.

Maybe he was thinking of the money.

As I walked around, the picture became more clear. I passed by a young man from the first cage fight, who was skilled when he had his opponent on the ground but too small to handle the fists and kicks coming at his face while standing. He took too many. His opponent lifted him upside down and dropped him on his neck.

And here he was, with his friends. They were lower middle class at best, and my guess is that the $500 made in such a short period of time was quite a waterfall.

The non-boxers all came out swinging; from there, the techniques varied. Some got cocky, taunting in place to conserve energy. Some swung wildly. The opponent of a guy in my gym kept falling to one knee and grimacing dramatically. Soon, though, the lack of conditioning and skill would end the match and bring on the paycheck.

"Ready to see someone get knocked the hell out?" the announcer asked, to applause.

The calculation of unskilled opponent equals win was not without its risks for the actual boxer. The street fighters were unpredictable, beyond their lack of boxing knowledge. Even if a dangerous hit was caught and penalized, the deed was done.

Among the crowd were more than a few men with battered faces. A fair number were grotesquely obese. Many of the white people were low income. Most of the women were scantily dressed, and not just the ring girls. Boxers' families were there, down to the small children.

I stood next to a guy from my gym who is planning to go pro in a year and said, "Take up accounting."

Last thing I heard that night was "At least you got $500!", ending a day that had started very differently. Nature and human nature: I was quite surprised by both.


photos from TheRockfordNetwork.com and mlive.com

boxing personal think on these things