good to be back.

- September 19, 2012
After a long, self-imposed, not entirely voluntary hiatus from boxing, I returned to the gym last week.

After a good year of going to the gym only when I felt top-notch, up to the task, I stepped foot in there on an off-day, content to accept rusty pivots, hesitant shots.

In some ways, boxing felt like riding a bike; knowing how to move was with me all along. Even on an off-day, even with a faulty elbow. For fun, I joined in on a lesson one boxer was giving a beginner, and was questioned by the teacher.

"I figure there's always something to learn," I told him.

I like that. Namely because I do consider myself a beast, and because I also know he knows my experience is limited. I took it more as "you have the potential to be a beast." 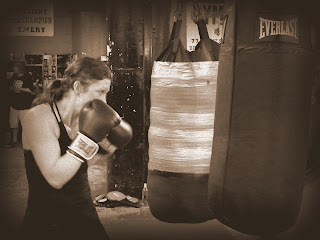 Overall the place felt empty; there'd been a robbery a few nights before. Someone took all those sweaty gloves, God knows for what. The bags and computer you understand, but the gloves were well worn and infused with a deep, musty stink. Now the new kids wandering in have nothing.

The loss hung in the air, with trainers scrambling to find gloves for a boy who was showing potential and was ready for padwork.

Yeah, I needed that. You forget to move, sometimes. I recall my first days in the gym, when it seemed all I heard was what I was doing wrong. For good reason, I realized soon enough, but it's a jolt to step into a boxing gym and have your every move analyzed. In the rest of life, you slip up and move on; someone's not there coaching the play by play. It's humbling, but you get used to it. Become grateful for it, even.

Because in those moments, when you're beating yourself up, something reminds you that you were there when that guy shadowboxing in the corner lost a bout. You were there, at the Golden Gloves, when the boxer on the speed bag today slipped and fell in the ring. You saw when the guy sparring forgot his mouthguard and the ref had to halt the round, but how he won it in the end. We've all slipped up, we know that, and we accept each other for both our strengths and our faults.

There's no such thing as an off day. Only show up and keep moving.