The Birds and the Bees, and the Hissing Cockroaches 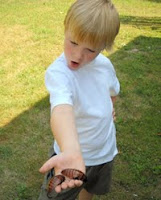 A continuation of a discovery made a few days ago.

SON: What's the white thing in the cockroach cage?

ME: It's called an "unfertilized egg case." It's filled with things that look like baby cockroaches but aren't.

SON: So they're dead.

ME: Well, uh, no. It's like the eggs in the frig, how they're not going to turn into baby chickens, because there were no boy chickens around.

SON: And our cockroaches are girls.

ME: Yes. One of them had this egg case, and she's hissing a lot to protect it because she thinks she had 30 babies, but she didn't, really, because, uh, they're real but not real. Sort of.

ME: Honestly? Neither do I.
hissing cockroaches NaBloPoMo