How To Choose Your Kid's Sport, Part 2 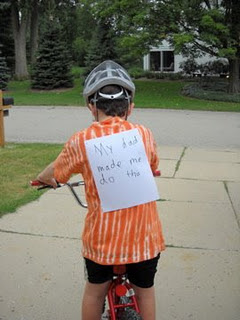 Simon on his bike. Can you read the sign he made and pasted onto his back? "My dad made me do this."

After writing the first post on how my son and I are similar, and the ways I try to help him find a sport now instead of in his 40s, I realized I was a lot like him as a kid.

Never would I have had the wit or chutzpah to make a sign like this, but I certainly didn't take to athletic activity. And what I'm doing now with my son was also tried by my mother: buy the kid some athleticism and grace by enrolling in a class.

The little pink plastic carrier opened at the top, for my leotard, and on the side, near the bottom, to hold my peach silk slippers. I liked the whole contraption. The class I could do without, but I was obedient back then, and did everything I was told. I plied and whatnot, without much flair.

Then one day I no longer had to go. Talk of "missing too many classes," "not allowed."

For years I referred to this as my "getting kicked out of ballet." Now, as a parent myself, I realize this was more about my mom than me. She didn't get me there, and surely I didn't remind her.

The thought counts for something. Though ballet is the last place I'd think to start a backward kid like me, it was among the few options available to little girls in my small western Pennsylvania town. It didn't take with me. Few physical endeavors did, though I would go on to play tennis in high school. Only in my mid-30s, when, in a pilates class, I felt my abdominal muscles contract, would I find the trigger for everything that followed.

Though I'm seemingly following in my mother's footsteps, the similarities end at handing over the money for a class. She would go on to find fault in much of my physical appearance, and I see now that ballet was just the beginning of trying to change me. But I am not trying to change Simon; rather, I'm trying to help him find that trigger to move him toward physical and emotional wellbeing. I'm convinced it lies in sports, for him, because the rest he has down. The comics that litter my dining room table are witty and well-crafted. The substitute lyrics for Justin Bieber's That Should Be Me, written on the spot this morning, were hilarious. He's a good boy.

We'll see how this wrestling business turns out. My little pink box ended up carrying Barbies instead of ballet shoes, and it's just as well, because now I carry a big Converse bag filled with boxing shoes and 12oz gloves. Simon's backpack, when he left this morning, held his shorts for afterschool practice, and I have to wonder what it will hold next.
parenting sports