Showing posts from March, 2010
Show all

- March 31, 2010
The week leading up to the competition was rough. I started a new job. I counted every calorie. I woke up every morning and asked my arm, "Everything okay? No tendonitis today? How about carpal tunnel?" The nerves threatened to do me in, and when I arrived at the YMCA on Saturday, I saw clues everywhere that maybe this wasn't the place for me. On a typical day at the Y, you'll see all types of people, all shapes, sizes, and ages. A toddler, hair still wet from swim lessons, will stand defiantly and block your way through the front door. A friendly elderly man is ahead of you at the front desk, checking in. A slightly overweight new mom sweats her way through lunges in the room you pass on the way to the lockers. Saturday, things looked a little different. Men without necks: everywhere. Tattoos and shaved heads: everywhere. Men whose chest diameter surpassed their total height: all over the place. I approached the desk to sign in, and the staff member tried in va
Post a Comment
Read more

Bring on the Big Plates, Baby

Another Story to Tell the Grandchildren 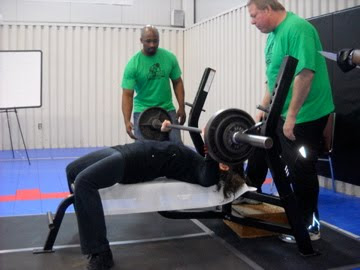 ..and all of you, once I catch my breath from doing this all morning.
Post a Comment
Read more

'Twas The Night Before Competition

- March 26, 2010
On the eve of my second bench press competition, I'm thinking about ways my training this year differs from last time around. Taking Care. Last year I loaded up on Hemp Protein in the two weeks before the competition and, in pictures, I'm a glowing green. This year I have no dairy allergy to contend with, so I went straight for whey protein isolate, the best protein source for muscles. After workouts, I'd drink a shake while applying ice to any inflamed areas. When the ice pack warmed, I'd massage all angry muscle fibers until they calmed down. And I really, really tried to remember to stretch. These efforts were important, especially as I moved towards higher weights this year. Ignoring My Trainer. My trainer is a large man who parks his 1972 red corvette legally in a handicapped spot near the entrance to the gym. Not one for subtleties, he tries his full bag of tricks on me and never notices it doesn't help. "My grandma could lift more than that,"
Post a Comment
Read more

At the Outdoor Sculpture Garden

- March 23, 2010
The wasp crosses Eve’s breast, testing leg-stick on Rodin’s bronze fingerprints, and the woman concerns herself only with this: the raising of arms and a knee, forever, the burden eased by a protrusion of alloy beneath her left foot. These limbs, wielded by Eve against all she now knows, cradle the wasp's nest. Banished, nature finds a way to her; and you come to look, after the apple, and before she is stung.
Post a Comment
Read more

Not Your Mother's Job Training

- March 20, 2010
How to monitor activity on 12 security cameras. What to do if someone is face down on the pavement. Who to call when a woman has handprints around her neck. I can't say I've ever had job training like yesterday's session at the homeless shelter. Tonight is my first shift alone, and I have a feeling I'm in for some surprises. Wish me luck--and safety, and good instincts, and grace and love toward all I meet.
1 comment
Read more

- March 15, 2010
Last night at The Open Door, a woman mimed sealing an envelope. The woman next to her silently nodded her understanding, resealed another envelope, and passed it on. Three more women earnestly handled this invisible object, and when asked later, each was sure she had been rolling a joint. Hilarity broke the silence. Also at The Open Door, a young woman wore a splint on her arm. She had been assaulted, she said, her hand twisted at such an extreme angle that the ligaments and tendons tore completely. Doctors had to reattach her hand. The sounds of Al Green played on a CD player later in the evening, and other women, sitting and standing, swayed to his smooth rhythms. Just a few feet away, in the hall, a teenager threatened to call the cops on her mother, who had just been playing air guitar in a pantomime. She broke my phone, the daughter cried. She spent the rent money on beer. I can't do this anymore. Last night marked the 23rd time I led theatre games with the women. I began v
Post a Comment
Read more

In The Second Year, The Shock Remains 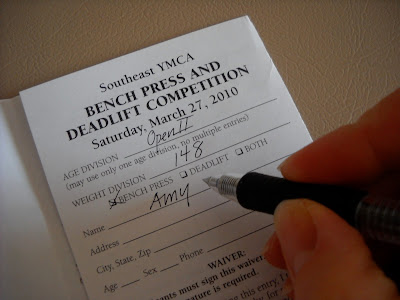 I accept any and all financial obligations for any injuries suffered by me in said event. I attest and verify that I am physically fit and have been sufficiently trained for the completion of this event. In this, my second year filling out this form, the shock--and panic--of writing "Amy" under "Bench Press" has not lessened. Not a bit.
Post a Comment
Read more

What You Don't Know

- March 07, 2010
I made a point of stopping today to talk with a man who, on Sundays, posts himself on a corner between two churches. Hoping to catch the before-and-after-prayers traffic, he carries a cardboard sign that reads, "HOMELESS - Please Help." His name is John. I brought along a brochure for the shelter where I teach theatre, as I wanted to be sure he knew about their services. Turns out he's been there off and on--they gave him the shoes on his feet, he pointed out--but the shelter's gathering room is too noisy for him. He gets claustrophobic, he says, so when he needs something, like the shoes, he calls and arranges for a private meeting. John could avail himself of more help, then, but even the availing is a struggle. It's something to consider: mental illness most likely caused John's homelessness, and is also preventing him from climbing back out. I hear this kind of thing often: that access to resources and desire to change aren't always enough to help s
Post a Comment
Read more

- March 04, 2010
In a New Yorker cartoon by Barbara Smaller , two children play in a sandbox. One says to the other, "It's all learning-is-fun and invented spelling then -- bam! -- second grade." After a morning spent in my son's kindergarten class, I get the joke. Let me admit up front that I'm not the ideal parent helper. I have very little patience with children other than my own. I forget to wear the volunteer badge. I wear beads that dangle when I lean over to help the children and which have, on occasion, been temporarily woven into their projects with yarn. My sons hold the following dialogue with me each night before my scheduled turns: ME: What's the last thing I want to do tomorrow? OFFSPRING: Help in my class. ME: Why am I doing it? OFFSPRING: Because you love us. I'm not all bad. I always suck it up and smile and offer no clues to my true feelings. Until one day last October. I'm poised and ready to help, beads reined in by the badge, which I've
4 comments
Read more

Girl Walks Into A Gym

- March 02, 2010
So I'm walking around in a tank top and my son says to me, "Whoa, Mom, your muscles look like a man's." He's six; this was a compliment. The boy has no idea that most moms don't bench press 125. But it got me thinking. Did I have the motto of one of my favorite exercise books-- "Lift Like A Man, Look Like A Goddess" --all wrong? Last night, a pretty young thing walked into the weight room, and the productivity of all the men fell into a steep decline. The man I pay to train me followed her around suggesting exercises and correcting her technique. An 18-year-old, who has told me in the past about his obsession with exercise, halted everything to become her human stopwatch, sparing the helpless maiden a turn of her neck toward the clock to time her own crunches. She certainly fit in the goddess category much better than I. But after she tried--and failed--to bench the bar, with any number of male spotters hovering over her pectorals, I sat down for
3 comments
Read more
More posts