Showing posts from March, 2011
Show all

Groups I Never Thought I'd Join But Have Done

When The Cat's Away 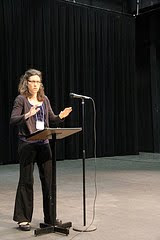 While I'm in South Carolina doing this: The rest of my family is back home making this: (Special thanks to Charlie Jones for sharing photos from the conference with me.)
2 comments
Read more

- March 28, 2011
At the boxing gym, there are dues to be paid. The money kind, and the kind where you prove your humility. Ain't gonna walk in, climb up into the ring and get some mitt work; first you must walk in front of the mirrors. Front and back. Side to side. Over and over. Then you may add punches. Then punches while walking. Again and again. Week after week. One day, after all that, someone will come, check out your form, and decide if your name can be added to the list of who goes where--the ring, the double-end bag, the speed bag. For about an hour I was huffing in front of the mirrors, day 2. A new guy couldn't get the steps, so I moved away and did my own thing. Over and over. Am looking at myself thinking everything's there--knees bent, space between the feet, elbows not flaring (finally). And yet: it all looked too tight, too tense. All the right moves but something's wrong. So I kept at it until I saw some people approaching. Another trainer, I'm told in the intr
1 comment
Read more

A Good Kind of Tired

I'm back from Greenville, SC, after a great weekend at the Applied Theatre Conference . A big hello to my new friends from the Theatre of the Oppressed track! Thanks for two great days together.
Post a Comment
Read more

- March 18, 2011
The Christian liturgical season of Lent began last week on Ash Wednesday, when believers all over the world received black ash on their foreheads to remind them of their mortality. Remember that you are dust, and to dust you shall return. Indeed, the whole of Lent is directed at repentance and self-denial in light of death--Jesus's, on the cross, and the believer's, when it comes. A friend--a devout believer--asked a question right around this time last year: Why am I forced to be sad? Why designate time to seek out the sad and, let's admit it, morose? Why allow any unpleasant emotion lengthy residence in our hearts? Once, when Theo was small, he announced he wanted to cry. It was time for a good cry, he said, and so he did. I held him and he wept. On the other hand, at the homeless shelter where I worked, women often reminded each other to brush off what came their way. Nothing anyone says to you changes who you are. I heard this principle again the other night
4 comments
Read more

- March 17, 2011
I've transitioned from a boxing class with folks looking to get fit to a boxing gym with inner city youth, some of whom have both parents in jail. It's different. It's good. Here we go.
Post a Comment
Read more

- March 14, 2011
2000: Learning there was a life growing inside me. 2001: Reading that the atomic bomb, dropped on August 6, 1945, killed an estimated 100,000 people, "many of whom were vaporized almost instantly. 100,000 more would die from cancer and other radiation-related illnesses in the decades to come."* These moments produced a crushing awe felt deep within, not able to be called back again, even a day later, leaving only the memory of feeling. And now, again, the unimaginable for Japan. This phrase I came across today, from another context, speaks to the difficulty in writing about such times, despite deep empathy: "The problem with tragic representation is that it is never tragic enough." ** * In Our Own Words: Extraordinary Speeches of the American Century , p 149 ** A Boal Companion , p 150
Post a Comment
Read more

An Unscientific Study On Diversification That Is Not Conclusive

- March 12, 2011
A woman I know has a frozen shoulder and is unable to move it. The connective tissue of her shoulder has thickened; though there's not always a known cause, often the condition comes on following an injury in which the shoulder was immobilized. Perhaps other parts of her body were overcompensating for its disuse, and this caused stress on the shoulder, which finally decided to give up. *** Our bodies are selfish. The muscles and bones are greedy children demanding equal attention from Mom or Dad; they act out when ignored. *** A young fan of Justin Bieber's claims she thinks of him 99% of her life. *** Where do 99% of my thoughts go? *** When I first had children, I was surrounded by literature and people obsessed with child-rearing. Their advice on rash cream and pureed peas proved useful at times, but the constant attention to their offspring elevated the babes to star status, their mothers to mere stagehands. *** What I write on, I think on. The other way, too, but
3 comments
Read more

- March 10, 2011
In the tenth grade, I was hospitalized for bronchial pneumonia. What I remember of the hospital stay is a persistent wondering: why is my mother is stationed in my room watching soaps, and why is the teenage boy from the down the hall sending me notes, when there's a vast expanse of reading time lying before me on my adjustable bed? Only occasionally did I give my mother a "turn off the television" look, and only once did I agree to meet the boy in the lounge. But romance in a time of congested lungs must surely be doomed; I would never again see the boy, whose pneumonia came about from lying drunk in a ditch. Hopefully he recovered, is doing well, and no longer going on dates wearing a blue and white gown. After that time my illnesses would go to the lungs, as they say; moving to Michigan six years ago would not help my breathing any, as I picked up allergies to everything except an exotic grass that grows in Texas. These factors surely contributed to my poor perfor
Post a Comment
Read more

I Hop U Read This

- March 10, 2011
No sooner had they burst through the door and dumped their backpacks were they huddled together on the couch, giggling, over a booklet of handmade cards celebrating Theo's "half" birthday. "I hop you have a gritty hayfe birithday," one read. HAHAHAHHA! "I hop you luk yor yume kuk," the other would read. HAHAHHAHHAH! I scolded the children for mocking Theo's classmates; as they slinked away, I slipped into another room with the booklet, and nearly wet myself reading "I hop you havanisharbertay." I also thought of IM A FN , a funny blog post I wrote back when I first learned about invented spelling. I hop you lik it.
2 comments
Read more

Found On My Camera: Perspective Edition 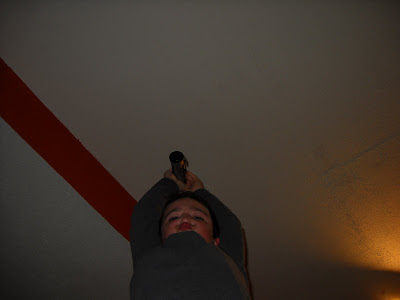 Is the camera above or below him? Your guess is as good as mine was--until I determined the part of my house this occurred in.
Post a Comment
Read more

The End Of An Era: RIP Chubby and Lipstick 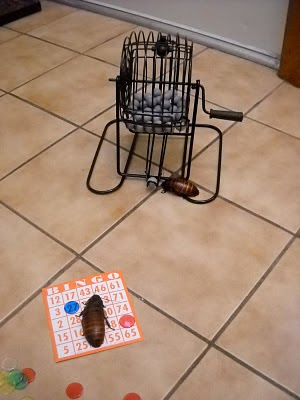 Let it be known that Chubby and Lipstick, our two giant Madagascar hissing cockroaches, have passed on. They were preceded in death by Sticky, the first of our roach pets, who lived a long and full life, despite being forced into re-enactments of WALL-E; and by Dora, their former roommate, who lived up to her title ("the Explorer") by venturing out of her LEGO castle and into the far reaches of the garage, where she was found during a Michigan season unlike those experienced on her home continent. We can't say exactly when Chubby and Lipstick passed on, unfortunately; they had been performing the dead cockroach exercise for some time now, and just when we'd shed a tear, they'd wiggle a little leg as if to say, Ha! Got you! Read about their past adventures here .
4 comments
Read more

- March 01, 2011
I can't quit thinking about getting hit in the head . Mostly I'm thinking about how I kept getting hit in the same place. The left side of my head. By her right glove. Hard. A bunch of times, and not all at once. One would think that if one was being hit repeatedly, one would get the idea to cover up that spot with one's glove to avoid it happening again. But no. I stood there thinking about other things. Like how I'd do something fancy, like a 1-3-2-3. POW. Right hook to the head. Maybe I can throw a strong jab and break through her gloves, I'm thinking. WHAM. Right hook to the head. Or if I throw two quick jabs, that'll really teach her. Yeah. BAM. Worrying about tomorrow when today is right here at my temple. And I thought, how often does that happen?
4 comments
Read more
More posts