Showing posts from January, 2016
Show all

This Poem From An Inmate Blew Me Away

My last post recounted a trip to Handlon Correctional Facility, where I met with 14 prisoners who had read my book, FRAMES: a picture of death, drugs, and forgiveness . The discussion was rich but some of them were quiet, so I suggested at the end that anyone who wanted to write down their thoughts about the book should do so. I never expected this. The following is a poem one of the men sent to me through the people who run the book club I visited. Even if you haven't read FRAMES, I think you'll catch that the sheer number of details he includes is astounding. The moments that spoke to him appear throughout, and he wraps up with what I know from our discussion had hit him the hardest: that Kevin was told he had done a good job. Everyone needs to hear that, he said, and when they do, they can move on. Mr. Williams: You, too, have done a good job. One that blows me away. Catch a recent radio interview with Amy here . Purchase FRAMES here . Visit our
6 comments
Read more 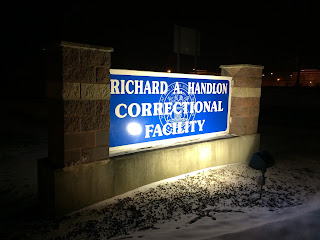 He raised his hand. He looked quite young but had been there 20 years, a juvenile lifer due to a mistake at 17. "I have questions for you, Ms. Scheer," he said, glancing down at his paper. He sat tall, an earnest man with intelligence. How did you choose this story. How did the story make you grow as a person. Which character did you most identify with, and why. This was the Life Change Book Club at a Level 2 prison in west Michigan. Here was Kenyatta who had prepared for my visit; Marcus, too. And others among the 14, who fidgeted through my introduction with their papers, so eager to say what they had written down that they asked what I had already just answered. "They're calling me a 'speaker' tonight," I said, "but I'm just a person who had this book happen to her," I told them. I had passed through a barbed-wire fence wearing a device with a red emergency button that had been tested after I attached it to my belt. I had been fr
4 comments
Read more
More posts