Showing posts from November, 2012
Show all

What Happens When A Theatre Major Studies Anatomy

- November 23, 2012
A page of notes per page of text. More on that later--first, a picture of the last class I taught: Jenny, a woman in her 60s, is performing forearm strikes on the heavy bag. These are a substitute for punches, which she can't do with her bad wrists. She also has ankle issues, and marched in place instead of jumping rope. Others are hitting and sweating away at their own bags. Janet, who is shortening her punches and generally not hitting from her core, is complaining that the class isn't sufficiently wearing her out. (The entire class, yes, was comprised of people whose names started with J. Including Jerry, who has stepped out into the hall. And Jenny, you remember her--she's peering out the window.) "He's puking," she says. I've got Janet who is not getting the workout she'd like, and I've got Jerry, who got more than he bargained for. Everybody else was smiling--except the staffer from the front desk who came to clean up. This microc
Post a Comment
Read more

How Long, Lord? A Post-Prison Lament 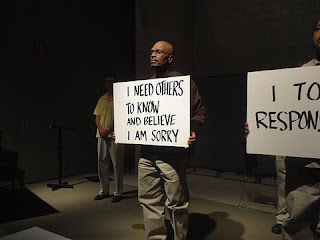 - November 10, 2012
On the eve of my husband's first foot race, I confessed a long-held bias: I dislike runners. The snooty kind, you know. The ones heading up your local shoe shop, pushing the vibrams and chewing the chia seeds. "Dude," I want to say, "I hit people in the head. You are not better than me because you have a 26.2 sticker on the rear of your minivan." Of course, all bias is born of insecurity. I can't run--or, I should say, can't bring myself to do it. Can't do tedium. Can't (attempt) to run a mile. I could tell myself I'd win a thousand dollars or save my child's life if I just jog to this point, but no amount of psychological coaching can get me around the block. And yet the runners' superiority bothers me for reasons other than my own failings. It's the exclusivity of their club: they run. That's their main thing. Whereas I like sampling a bunch of sports, which you can call fear of commitment or, preferably, cross-train
2 comments
Read more

The Problem With Pants

- November 08, 2012
The pants I'm wearing today have a large hole above and to the left of the right rear pocket. The front right pocket is starting to pull from the seam, creating another rip. Because I am aware of these problems, and because I hate to sew, I wear a long shirt. Had I not told you, you wouldn't have known. Two weeks ago I dressed for church, and at the last minute turned to check the rear view. Though I am 41 years old, it has taken me until recently to learn to look for underwear lines, food between my teeth, etc. At this check it was discovered that two seams in the seat had pulled apart. Another seam, in a more private location, had completely ripped. I changed. And back a couple of summers ago, while wearing a favorite pair of comfy pants, I met a new neighbor outside for the first time. Our conversation was heavy: she had recently recovered from brain surgery. As she relayed the story in great detail, I noticed her eyes glancing down quite frequently. Must be a side eff
Post a Comment
Read more

- November 04, 2012
There's a theme of forgiveness running through my current projects. My play, crafted from the words of former prisoners and performed by them, asks the audience to face their feelings on who deserves a second chance. Are you more worthy than they? And my book  shows that an act of forgiveness can turn one life around even after another has been lost. Forgiveness does not come cheaply in either case. The men have been given another shot at life, and though many have made restitution with their victims and tried to become productive members of society, they find their options limited. Some may say they deserve no more, but what is a sentence that can never be completed? (An alternate subtitle for the play had been "Serving a Life Sentence After Prison.") And though Kevin forgave the driver who killed his wife, the two men would not become friends, and Marilyn could not be brought back. There are times when I ask myself if I should be siding with the former criminals.
Post a Comment
Read more
More posts