Your Mama Plays with Roaches 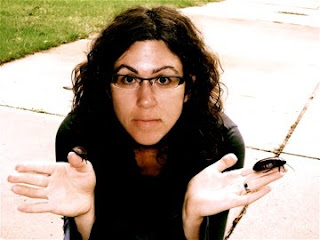 Yesterday, on two separate occasions and while holding a three-inch cockroach, I was called a "good mother."

Seems I'm to be admired for providing such pets for my children. And, it must be added, to be feared for losing one of them. Let it be known that our missing hissing giant Madagascar cockroach will not breed with any American friends she may meet in our garage, nor will the roommates she left behind spread "disease juice," as a woman suggested yesterday before leaving her young son in my care. They're just insects, okay? And they're cool.

This got me thinking about my history with odd creatures. Growing up I had a poodle for a pet--dear, departed Snowball--and the occasional gerbil and rabbit. But once I was a full-fledged adult I put myself in the vicinity of some slightly more interesting non-humans.

In Tallahassee, where alligator roadkill was commonplace, I signed up for Reptile Handling, a prerequisite for those who wished to give presentations for the Tallahassee Museum. My specialty was gopher tortoises, but I also learned about and handled snakes and small alligators.

One day, during someone else's presentation, I caught a snake escaping from his cage. Perhaps due to incidents like these, plus all the talk about salmonella, I decided to give up reptile handling once I became pregnant. But I'm proud to say I know the right way to corner a small alligator and grab him so he won't take my finger (all the while trying, not always successfully, to avoid needing the "flip him and make him momentarily unconscious" technique).

Also in Tallahassee I volunteered for a time at an animal rehabilitation center. The center was located on private property in the backwoods of Wakulla County near where the first Tarzan movie was made, and run by a woman trying to save injured opossums from becoming her neighbors' dinner.

Frozen mice for the hawks rested in her freezer, worms wriggled in the frig. A little pot-bellied pig tippy-tapped throughout the house. Hence I always refused food and drink while volunteering, and here too I quit when becoming pregnant. But in the meantime I met a one-eyed horse who loved a three-legged goat, and a baby owl who swayed to the samba. I locked myself into the one-winged pelicans' cage and scrubbed astroturf under their watchful eyes, careful not to disturb the very large spider and web in the corner.

When I birthed a boy who grew to love bugs of all shapes and sizes, I set out to find him a pet that would survive longer than a day in an empty yogurt container punched with air holes. We raised ladybugs and worms, and moved on to the hissing cockroach; Sticky, our first, lived nearly two years. We read books about bugs. I consult my friend Bob Davidson, an entomologist at the Carnegie Museum who has always regaled me with stories about his bug-finding trips (he's got a few named after him), and whose house I've been known to pepper with black plastic ants. He advised me while I wrote an article on an entomologist for Northwestern College--there, too, I learned more about the little creatures that populate our world.

Two cockroaches, then, aren't too big of a deal, especially for a good mom like me.
hissing cockroaches