And that maybe on occasion I've let her out to "play" in the backyard until a neighbor knocked on the door to report that "the bunny has escaped." This only happened two times. Maybe three.

But I meant it when I told my son that sometimes, when we love someone, we have to let them go. We have to do what's best for them, which may not be what we want. And maybe I didn't bring up the parts about them coming back if they were really yours, etc. 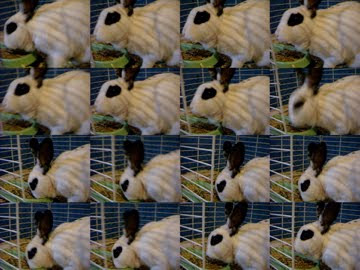 Dottie first came home with us about five years ago, while Greg was traveling in Uganda. Internet connections were spotty, and I remember getting out a short email that said, "And by the way, we have a pet." Dottie unofficially became Simon's pet, arriving right when he needed something furry to hug and hold. She stayed in his room at our first apartment in Grand Rapids; I have pictures of him reading with her on his lap.

When we moved to our new house, we tried giving Dottie her own little room in the basement, but soon we realized that the furnace was sucking in bunny fur and spreading it all over the house. Somehow, our animal allergies weren't triggered back in the apartment, but here, both Greg and I really suffered. Dottie moved to the garage.

In good weather, we'd move her outdoors for the day. But in winter, she stayed in the garage. You don't send your kids to play in the garage in Michigan in February. Dottie was fed and cared for, but we couldn't give her the time she deserved. Too, the kids loved her, but it began to be an "in theory" love that Greg and I noticed wasn't fleshed out with any action.

So when our new neighbors asked us some bunny care questions, I told them to hold off on that purchase. I talked to Simon and planted the idea that with winter coming, maybe Dottie would have a better life with them. We had approached this topic last year, but he wasn't ready. Again, I let him make the decision.

Days later I was ichatting with Greg, who this time was in Ukraine.
"Remember how, when you were in Uganda, we got a pet?" I wrote.
"Uh oh."
"No, it's all good."

The family came today to get Dottie and all her earthly belongings. I apologized for her long nails, but they didn't care--the young girl just wanted to brush her fur, and the dad dreamed aloud of specs for the cage he would build. He told me of their fenced-in backyard, and the room waiting in their basement. And does she like the peel of apples, or just the core, or should he peel some slices?

She'll be fine. As will we; Simon knows he made a good decision, and frankly, he's grateful to be relieved of cleaning duties.

Plus, I promised a hamster.
parenting personal