While I Was Away, He Killed The Pets

- April 25, 2012
Leaving the house for a week alone is no last-minute vacation for a mom. We load the frig, change the beds, pack a few lunches and write copious notes. In my case, I wrote everything from "change the hand towel" to "feed the sea monkeys."

Yeah, that's right, I wrote it down. For Greg. The guy in charge while I was away. Feed the sea monkeys.


You'll recall my earlier posts on the sea monkeys and their happy swirling above my kitchen sink. The occasional staredowns. The continual coupling. They were just powder in a packet back in September of 2011, when I bought them for Theo's eighth birthday; but now, seven months later, we've moved through generations upon generations that even ancestry.com would have trouble tracking.

That is, until I left for New York. I come back, and no sea monkeys.

HE KILLED THE SEA MONKEYS.

Oh sure, he claims he fed them according to my directions. That's what he says. Do you believe it? I don't. Because there is no more swirling. There is quiet water.

Instead, I come home to this: 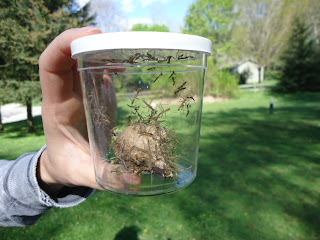 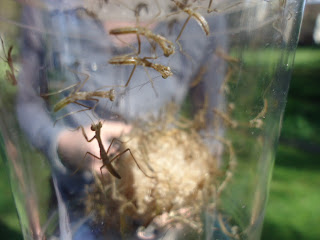 Approximately 100 praying mantises. Granted, I'm the one who bought the egg case from which they hatched. I wanted a hundred praying mantises. There is no creature more badass than the mantis, who can turn its head on its neck as if to say, You talkin' to me? I wanted my own.

But they're no substitute for happy monkeys. In fact, the spiritual name aside, the mantis is without morals. They'll eat each other if hungry enough.

And we all know what the female does after mating.

You don't want to upset the woman. A fair warning to Greg.


creatures in my house