This Week In Pets

- April 29, 2012
You are by now aware of our household pet situation: no more roaches, no more rabbit, no more sea monkeys, one hundred praying mantises. One mouse, down from three.

And then this crossed our path as the boys and I walked home from the bus stop: 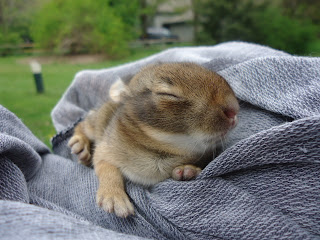 A baby bunny. So young its eyes hadn't yet opened, but ambulatory enough to hobble onto our path, stand on its legs, and walk toward us as we talked.

To us, not away from us. Animals just don't do that. Right there in the street I decided we would rescue this thing, and to that end I took off my shirt to carry it home. (I had only stripped down to a tank, yet still, my younger son stopped, looked at me with what I think was disdain, and said, "Really, Mom."

This bunny was very definitely the cutest thing anyone has ever seen. 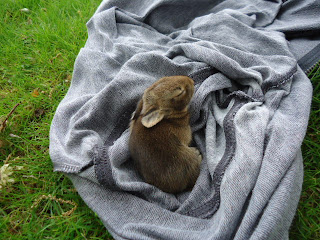 I learned on the internet that the mama would be coming back to call for her baby in the middle of the night, and that we should return him under the tree near where he approached us. At the time of rescue, a dog ran around nearby; this middle of the night return seemed safer.

The next morning, baby was gone, and we trust there was a joyful midnight reunion. Meanwhile in the narrative of house creatures, the four praying mantises we saved from the 100 were promptly dying. Instructions said to feed them "soft-bodied insects," which are surprisingly difficult to track down. We had found a fly, and anytime an ant picnic convened under the dining room table, I scooped up the festivities and fed the mantises. And yet they were dying. I set them all free outside.

The tally: no sea monkeys, no rabbit, no baby rabbit, no roaches, no mantises.

Which leaves us with one mouse, whose fate is unclear. Just as I stripped down in the street without a second thought, so too an unbidden idea came to me when, a few days ago, a hawk flew overhead.

I wonder what would happen...